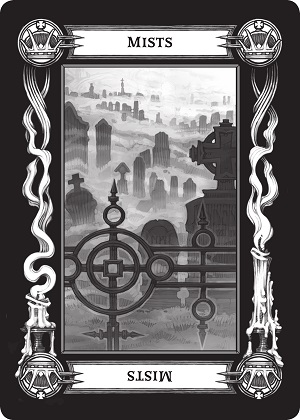 This is a 5th Edition Dungeons and Dragons campaign. It is inspired primarily by the Ravenloft game setting and the campaign is based on the Curse of Strahd adventure book. This setting represents a pre-industrial period in a land of dark mystery and horror, with influence from various Gothic and horror mythoi.

The Mists of Shadow Moor

The first king is dead. He has been dead for generations. Without a successor, the new barons of this colonized land fought for the throne. The wars were bitter and prolonged, and all sides lost dramatically. Generations of able-body and able-minded men died. The nobility declined in numbers and influence. Trade all but collapsed and a new dark age swallowed the burgeoning renaissance.

Revolutions finally ended that multi-generational conflict. The peasants rose up to end the succession wars and depose their rulers. Some nobles survive and maintain power, others just a semblance of it. In some baronies, the nobility was completely replaced by strong or wealthy factions who seized power at opportune moments. What resulted was a ruling class that no longer had the resources or political strength to wage war, nor even to reconcile and consolidate with one another.

The revolutions happened across the Baronies, at roughly the same time, but without cohesion and with very different motivations. Some revolutionaries fought for more representative government. Some for independence. Others fought to end the practice of slavery. Most dramatically, and perhaps with the most lasting impact, a great deal of revolutionaries fought to instill monotheism in their own lands and the neighboring lands. Long after the revolutions died, worship of the Lawgiver remains the only accepted religion, though varying denominations still squabble among themselves.

The decline and folly of the nobility was widely blamed on arcanism. The old king enforced strict laws against arcane magic, a corrupting force known to be linked to dark powers. But in the absence of the king and his laws, many noble houses sought alliances with such dark forces in an attempt to overcome their neighbors and seize the throne. To this day, none of the baronies formally forbids use of such magic, but public sentiment keeps arcanist societies underground and lone arcane practitioners in the shadows.

Technology and “tinkering” once enjoyed popular interest in this land, particularly in large population centers. The old king’s suppression of arcane magic created a need for technological answers to life’s many inconveniences. Smart minds turned from pursuits of igneous conjuration to those of mechanical locomotion. But the rise of monotheism, and the dearth of governmental funding, conspired to return the land to a simpler time. Though the fruits of great architecture and alchemy remain, few people now have access to them. Rare is the industrial machine that survives to this age, let alone still serving its original function.

The baronies now linger in a quiet turmoil, a lasting darkness and xenophobia. Town walls have become popular erections. And the wilds beyond them are thicker and more dangerous. Once-popular roads have thinned or been swallowed whole by the deepening wilderness. Political ties and trade between baronies, and even individual towns, have all but ceased. If the baronies remain so isolated, their remnants of humanity risk dying out. In this dark time, courageous souls are needed to brave those wilds, to establish regular contacts, and to carry the mail.

I'm sorry, but we no longer support this web browser. Please upgrade your browser or install Chrome or Firefox to enjoy the full functionality of this site.